April saw job vacancies in the UK rise by 19.8% on last year. This boost in vacancies, alongside the increased number of people already in employment, has also led to the number of jobseekers per vacancy falling to an average of 1.39 – a 38% decrease since April 2013. This means that job seekers are faced with more jobs and less competition.

This report by Adzuna makes it clear that the British job market is looking healthier than it has in a long time, with the Guardian also reporting that unemployment is at the lowest it has been since February 2009.

Salaries are on the rise too for the first time in seven months, climbing an average of 1.2% month-on-month. Andrew Hunter, co-founder of Adzuna, explains: “Real wages have been falling consistently since the recession. But now they are beginning to claw their way back upwards, sped along by declining competition between jobseekers, which is encouraging employees to raise salary stakes to attract the best staff.” 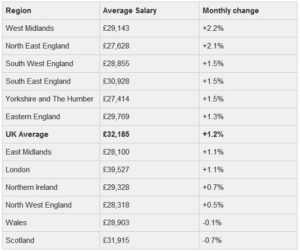 With candidates having the luxury of choice again, it’s time for employers to start working harder to lure them in. The job market grew stagnant during the recession, while people were preserving their job security rather than looking to actively progress their careers. Now, though, we are seeing more movement – which is good for both the companies who get fresh new talent in, and for candidates who get a new challenge with a different employer.

The increase in employment levels is attributed to a certain extent to the rise in self-employment, which currently sits at almost 4.6 million people in the UK – the highest number since the 1970s. Self-employed people have an average salary of around 40% less than their employed counterparts – but if you’re a self-employed person who would like to earn more, we can help you find freelance work with very competitive rates.

Welcome to another instalment of our Meet the Team blog series. These Q and As are a great opportunity for you to get to know our consultants and find...
Read More

Welcome to our 2022 Salary Trends Guide

We’ve got some good news… Our Salary Trends Guide is back for a second year running! Our guide covers insight into our 2021/2022 sector trends ...
Read More

Our Senior Recruiter, Fee Kennardsmith, talks through some things to consider when going through a digital transformation and how to ensure you have a...
Read More

This website uses cookies to improve your experience while you navigate through the website. Out of these cookies, the cookies that are categorized as necessary are stored on your browser as they are essential for the working of basic functionalities of the website. We also use third-party cookies that help us analyze and understand how you use this website. These cookies will be stored in your browser only with your consent. You also have the option to opt-out of these cookies. But opting out of some of these cookies may have an effect on your browsing experience.
Necessary Always Enabled
Necessary cookies are absolutely essential for the website to function properly. This category only includes cookies that ensures basic functionalities and security features of the website. These cookies do not store any personal information.
Non-necessary
Any cookies that may not be particularly necessary for the website to function and is used specifically to collect user personal data via analytics, ads, other embedded contents are termed as non-necessary cookies. It is mandatory to procure user consent prior to running these cookies on your website.
SAVE & ACCEPT